Even in the days of the antiquity natural cork, resin and pitch were used as materials for bottle caps. Around 1680, Pierre Pérignon, a Benedictine monk, replaced the wooden plugs, used until then on bottles for sparkling wine, with corks because these do not pop out even during long periods of transportation.

Only since 1890 the true significance of cork became evident: As the trade and economic relationships between nations began to widen and goods needed to cover longer distances, bottles had to be closed tighter for long routes of transportation.

Around 1880 nearly 1000 people were working in the Delmenhorst’s cork industry and producing 280 million bottle corks per year. In 1892, William Painter, an inventor from Baltimore, patented the crown caps in the USA. And in 1903 Michael J. Owens the American succeeded in the automated process of bottle blowing using molten glass. This resulted in a steep rise in the production of bottles. In Germany, the Owens machine was used in 1908 for the first time.

In the year 1901, Arthur Linck was born at a time when in Spain and Portugal cork oak trees were being cultivated extensively and cork began its triumphal march through the industrialized countries as the most sought after raw material.

Since the 1950s we were successfully producing a wide range of cork products such as bottle corks and sealing discs. In addition, we were lining cork products also with plastic and aluminium foils.

The year 1956 saw a major step into the industrial future: the product range around DKF® crown caps made of thin metal sheet lined with cork sealing discs was further expanded.

Once the Euro bottle was introduced mid 1960s and the 0.33 litre bottles became the significant standard, the demand for crown caps rose up in the German breweries. 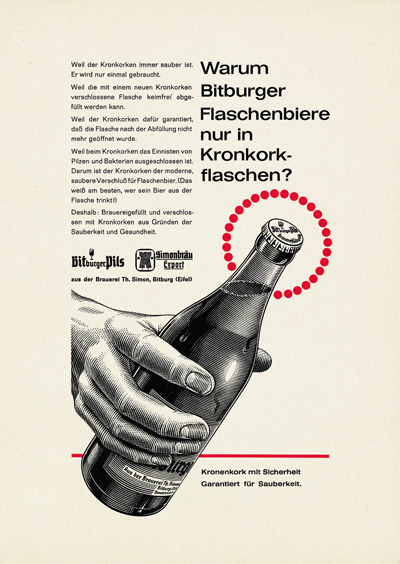 In 1964, due to an increased demand for space within the city of Delmenhorst, the company was relocated for the second time and a new factory was built in its present location.

Since 1970/71 also gas-proof 28mm aluminium screw caps are being produced under the brand name DEL-CAP®, used by operators of mineral springs for returnable glass bottles.

In 1982 and 1989, with Edgar Linck and Andreas Linck the third generation is ushered into the company.

At the beginning of the 1990s, as Europe’s first manufacturer, DKF switches the crown cap production totally over to PVC-free sealants within a record time.

From 1995 to 2015, DKF produces, besides caps made of steel and aluminium, also plastic caps, initially for PET reusable but later also for PET disposable bottles.

Constant optimization of production processes in tandem with running investments in highly sophisticated machine pool and the development of our employees are the conditions for a successful future of Delmenhorst Kork-Fabrik Arthur Linck GmbH.

Write to us anytime you have a query: